The Theatre Royal, Drury Lane is a west-end theatre situated in Covent Garden that faces Catherine Street and backs onto Drury Lane. The current building is the most recent in a line of four theatres that have occupied the same location dating back to 1663, making it London's oldest theatre. For its first two hundred years of existance, the 'Drury Lane' could "reasonably have claimed to be London's leading theatre"  and for most of that time, it was one of just a handful of patent theatres that were granted monopoly rights to produce what was deemed to be "legitimate" drama in the capital (meaning spoken plays, rather than plays with music)

The first theatre on the site was built at for Thomas Killigrew in the early years of the English Restoration and actors appearing at the time included Nell Gwyn and Charles Hart. The theatre burnt down in 1672 and Killigrew built back a larger venue in the same spot, designed by Sir Christopher Wren and renamed the venue  "Theatre Royal in Drury Lane" which opened in 1674.

This version of the theatre lasted nearly 120 years, under the leadership from amongst others, David Garrick, Colley Cibber, and Richard Brinsley Sheridan.  Shakespearian actor Charles Macklin performed in the theatre in 1791 while it was under the management of Sheridan, and shortly after, the building was demolished to make way for an even bigger venue that opened to the public in 1794. The enormous new 'Drury Lane' lasted just 15 years before burning down and the building that stands today was opened in 1812.

The Theatre Royal Drury Lane has been home to actors as diverse as the great Shakespearean actor Edmund Kean, Clara Fisher, Dan Leno and the madcap comedy team Monty Python and is today owned by Andrew Lloyd-Webber and generally used to stage popular west end musicals.  The Theatre Royal Drury Lane has received a Grade I listing from English Heritage.

The theatre has been called one of the most haunted theatres in the world and it is said that the appearance of any one of the alleged multiple ghosts that are said to frequent the theatre is a signal of good luck for both an actor or production. The "Man in Grey" is the most famous of the ghosts, and appears dressed as an 18th century nobleman. Legend has it that he is the ghost of a murdered man whose remains were found within a walled-up side passage in the theatre in 1848.

Other ghosts said to haunt the theatre are of actor Charles Macklin and clown Joe Grimaldi. Macklin appears backstage, wandering along the corridor which stands in the spot where he killed fellow actor Thomas Hallam in 1735 in an argument over a wig.  Grimaldi is a helpful apparition, who purportedly has guided nervous actors about the stage.

Tickets to all performances at the Theatre Royal Drury Lane can be booked securely through this website.

FAQ's About Tickets To The Theatre Royal Drury Lane

How Can I Buy Cheap Tickets To The Theatre Royal Drury Lane?

The Theatre Royal Drury Lane is a huge venue with four tiers that all need to be filled for 8 shows every single week. This means that there is a good chance that no ,matter how popular the current show is, tickets will eventually find a level and both off peak and mid week performances should hopefully then bring some value.

Despite being on the second floor of this huge venue, the seats in the upper circle do offer a pretty good and clear view of the stage and booking tickets in this section is ideal for those on a budget.  The balcony section however is very high up and possibly not suitable for people who are not comfortable with heights or who suffer from vertigo.  It is always recommended that you check the seating plan prior to purchase so that you have absolute clarity about where in the venue you will be seated.

When Is The Best Time To Book Tickets To Theatre Royal Drury Lane?

Family friendly shows will always be in huge demand during peak periods such as school holidays and weekends so bargain hunters should avoid these times if possible when looking for value in the price.  The quieter months of November, January and February should hopefully see downward movements in the ticket price (especially in the cheaper sections of the theatre) and the weeks that follow on from school holidays consistently bring savings for family shows as peoples finances can sometimes to be stretched during these times but seats still need to be filled.

Why Is There A Booking Fee Added To The Price Of Tickets To Theatre Royal Drury Lane?

If you book tickets through a third party such as a website or the shops in and around Leicester Square there is a good chance especially during peak periods that there will be a booking fee included in the price.  This is because the producers of the show are confident that they can sell this show and fill the venue at full price due to the sheer public demand and therefore do not offer any discounted rates to agents who then are forced to charge a booking fee to make a profit.  The good news though is that a venue the size of the Theatre Royal Drury Lane needs to be filled for 8 shows every single week of the year and to do that there will always be weeks that present a challenge, and it is these times where the producers will offer agents negotiated discounted rates that they in turn can pass on to the consumer often resulting in some great value for money.  When booking West End theatre tickets through a third party website it is always worth checking that the agent is a member of the Society of Ticket Agents and Retailers (STAR) to ensure complete transparency and peace of mind over your purchase.

Should I Avoid Tickets To Theatre Royal Drury Lane That Are Marked Restricted View?

Generally speaking the seats in the stalls do offer a very good view of the stage however from row S and onwards there is a small restriction to the view from the overhang from the royal circle which in turn also has some restrictions from the overhang from the grand circle from row H.  The price of tickets in these seats should however reflect this no matter how small the restriction and certainly in the cut off rows of S in the stalls and H in the royal circle this can mean excellent value for money to the consumer and is well worth exploring.  Any restrictions in the upper circle or balcony though should be looked at with caution and possibly avoided.  It is always highly recommended to check the seating plan thoroughly before booking tickets to ensure full transparency over your purchase.

(5mins) Go right on Long Acre; turn right into Bow Street and after 100 metres it will be on your left in Russell Street/Catherine Street. 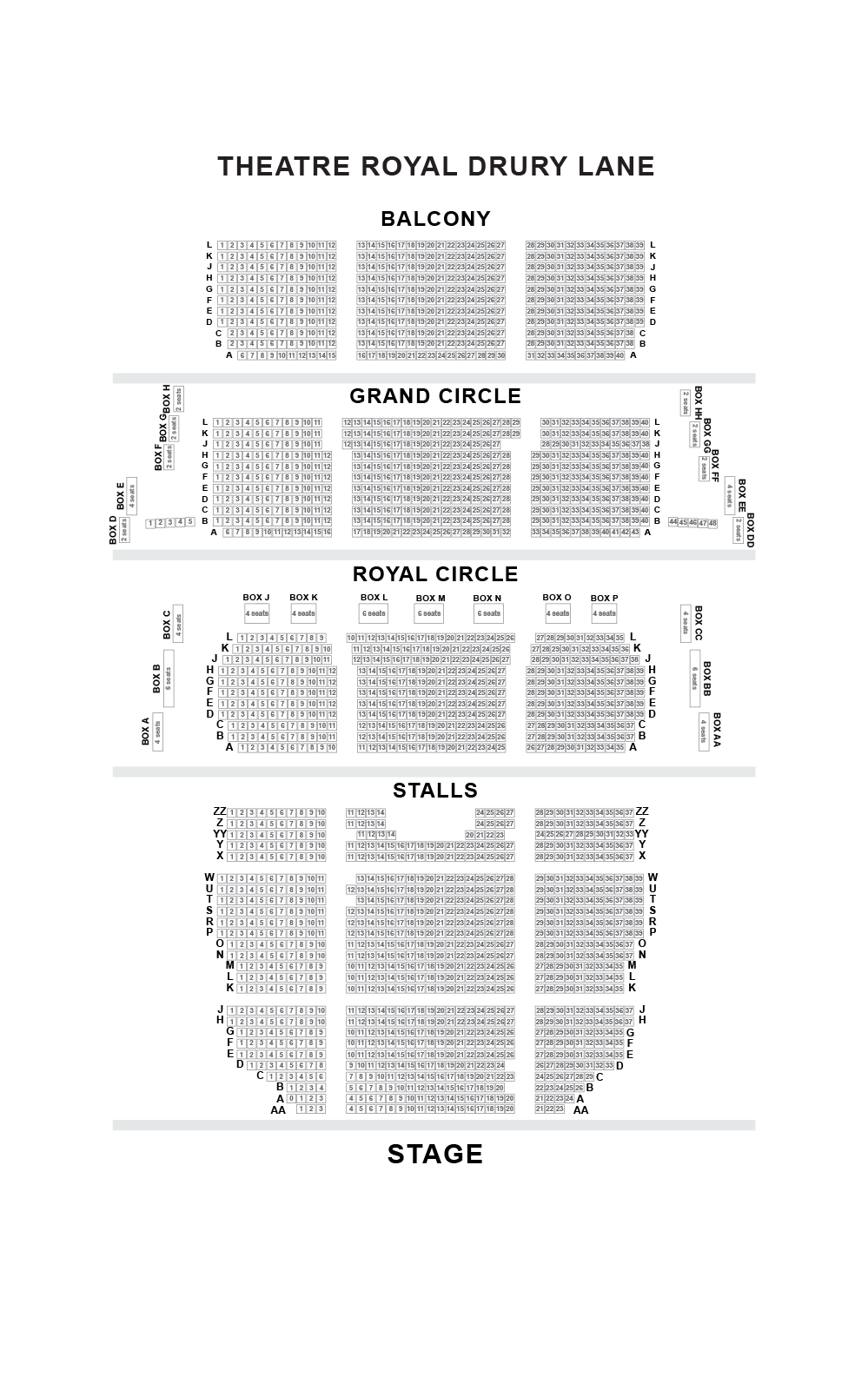