Tickets To 'The Lion King' Now Available Until Feb 2023.

Disney favourite The Lion King will continue to roar in the West End as producers have announced an extension to its run at the Lyceum Theatre through until at least February 12th 2023. Tickets to The Lion King are on sale now both online and from the box office.

The plot of Disney's The Lion King is based on the much loved animated Disney movie of the same name, and follows the fortunes of the young lion cub Simba as he grows to eventually become King of the Pride Lands. The musical fearures an acclaimed score from Sir Elton John with songs including "Hakuna Matata", "Can You Feel The Love Tonight", and "I Just Can't Wait to be King".

Leading the West End cast of The Lion King is Kayi Ushe who plays Simba. He is joined by Mark Roper as Pumbaa, George Asprey as Scar, Jamie McGregor as Timon, Shaun Escoffery as Mufasa, Phil Adèle as Ed, Thenjiwe Thendiva Nofemele as Rafiki, David Blake as Banzai, Janique Charles as Nala, Gary Jordan as Zazu, and Melone M'Kenzy as Shenzi.

The Lion King is one of four musicals from Disney that are currently showcasing in the West End this summer alongside Mary Poppins, Beauty and the Beast and Frozen.

Performances of The Lion King are at the Lyceum Theatre until February 12th 2023. 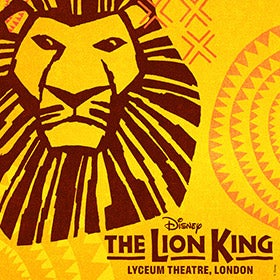