Tickets & Information For The Prince Of Wales Theatre

The Prince of Wales Theatre is a west-end theatre close to Piccadilly Circus and Leicester Square on Coventry Street. The theatre was established in 1884 and rebuilt in 1937, and with a further extensive refurbishment in 2004 by the owner, Sir Cameron Mackintosh. The theatre received a Grade II listing by English Heritage in1999.

C.J. Phipps built the 'Prince's Theatre' on the site in 1884 for actor-manager Edgar Bruce which was a traditional three-tier theatre, and seated just over 1,000 people and was renamed the "Prince of Wales Theatre" in 1886.

The first production at the venue was W.S. Gilbert's 'The Palace Of Truth' in 1884, which starred Herbert Beerbohm Tree. This was followed by a free adaptation of Henrik Ipsen's play 'A Dolls House', called 'Breaking A Butterfly'. Lillie Langtry played in 'Princess George' and again in 'The School For Scandal' in 1885, however, the first hit production at the theatre was the record-breaking comic opera 'Dorothy', which was so commercially successful that the proceeds were used to build the Lyric Theatre where the show moved to in 1888.

Notable productions to be presented at the Prince Of Wales Theatre during this period were amongst others, George Edwardes'  'In Town', and 'A Gaiety Girl'. The theatre began to present straight plays in 1898 with Maeterlinck's 'Pelleas Et Melisande' which was followed by Wills's adaptation of Dickens 'A Tale Of Two Cities' as 'The Only Way' the year after.

Musical comedies were staged after the turn of the century including the Frank Curzon and Isabel Jay shows 'Miss Hook Of Holland', and 'The Balkan Princess', and more hits followed during World War I with  'Broadway Jones' and 'Yes Uncle'.

A series of plays were also staged at the venue such as Avery Hopwood's  'Fair And Warmer' and Ivor Novello's 'The Rat' which was the very first in which he also starred. In 1921, revues also began to be staged such as 'A to Z' , 'Co-Optimists', and 'Chjarlots Revue',

After half a century of performances, the theatre's 800 seat capacity was deemed insufficient for the kind of productions that needed to be staged and the theatre was demolished. Gracie Fields sang to the workmen as she laid the foundation stone of the brand new Art Deco style decorated venue in June 1937, which was designed by Robert Cromie, and the theatre finally opened again with a capacity of 1,100 on 27th October that year. It also had a larger stage and much improved facilities for both the public and artists alike.

The first productions to be performed at the new venue were 'Les Folies De Paris Et Londres' which was followed in 1938 by 'Folies De Can Can', which was seen as a continuation of the successful risqué revues, carried on from the old theatre and ran continuously nightly until 2am.

In 1941 the Prince Of Wales Theatre screened the UK premiere of Charlie Chaplin's movie 'The Great Dictator' which had been banned in many parts of Europe.  Alfred Esdaile, the theatre's manager was fined for showing it

Sid Field made his west-end debut in 1943 with 'Strike A New Note' and he returned with 'Strike It Again' and 'Piccadilly Hayride' which ran for 778 performances. The Prince Of Wales Theatre hosted variety and revues during the 1950s, featuring star performers including Bob Hope, Hughie Green, Frankie Howard, and Morcombe And Wise and further commercial success came to the venue in 1959 as Paul Osborn's 'The World Of Susie Wong' went on to become the longest-running play to date at the venue with a mammoth 832 performances.

Further success followed with Neil Simon's play, 'Come Blow Your Horn' starring Michael Crawford in 1962 and was followed by a string of Broadway musicals, including 'Funny Girl' in 1966 starring Barbra Streisand, 'Sweet Charity' the following year, and 'Promises Promises' in 1969. however, when Andrew Lloyd-Webber's, 'Aspects Of Love' opened at the venue in 1989, it smashed all previous box-office records at the theatre, with a run of 1,325 performances.

The venue went through a full refurbishment program in 2004 which increased the seating capacity slightly to 1,160 and modernised the facilities.

Commercial success came once more when the theatre re-opened with the ABBA-inspired juke box musical 'Mamma Mia'on 16th April 2004 and went on to become the longest-running show ever at the Prince of Wales, before moving to the Novello Theatre to make way for the current resident show at the venue, The Book Of Mormon.

Tickets to all productions at the Prince Of Wales Theatre can be booked securely through this website.

FAQ's About Booking Tickets To The Prince Of Wales Theatre

Are Tickets To The Prince Of Wales Theatre Expensive?

They can be, depending on the show.  The most popular musical tickets to the biggest shows can sell for over £250 each at weekends and during peak times such as school holidays.  Prices do seem to calm down a little in off peak periods and midweek so some value is creeping in slowly if you are flexible with dates and can do a little research.

Do They Ever Discount Tickets To The Prince Of Wales Theatre?

It is extremely rare to see discounts tickets however for midweek performances they regularly sell at face value with no booking fees during quiet periods and while there are hardly ever any 'official' discounts, prices can often fluctuate and get marked down to fill the theatre in quiet weeks.

What Is The Best Way To Find Cheap Tickets To The Prince Of Wales Theatre?

With the exception of super peak periods like school holidays or Christmas week, the Wednesday matinee performance seems to regularly offer great value if you are looking for cheap tickets to with prices starting from around £20.

Are There Any Tickets To The Prince Of Wales Theatre That Should Be Avoided?

The Prince Of Wales Theatre is one of the few West End theatres that has very few seats that come with restrictions to the view as there are no pillars to negotiate your way around and the overhang from the circle is not a problem. There are a few seats on each side of the stalls that do have a slight restriction but even that is minimal and is also reflected in the price.  Any tickets to that have even the slightest restriction to your view should be marked as R/V on the seating plan and also on the ticket itself to give you full transparency about your purchase.

How Do I Make Sure I Don't Get Ripped Off Buying Tickets To The Prince Of Wales Theatre?

Before booking your tickets, always make sure that you are using either an official ticket agent or book directly from the box office itself at the theatre.  When booking tickets online, only use websites that are either members of, or are affiliated with the Society Of London Theatre (SOLT) and/or the Society of Ticket Agents and Retailers (STAR) which should be clearly visible on the website.  If you are buying tickets from retail outlets such as the shops in and around Leicester Square it is always advisable to ask whether they are 'official' vendors prior to purchase to avoid any confusion.

(2mins) Take Coventry Street and the theatre is be past the London Trocadero on your right. 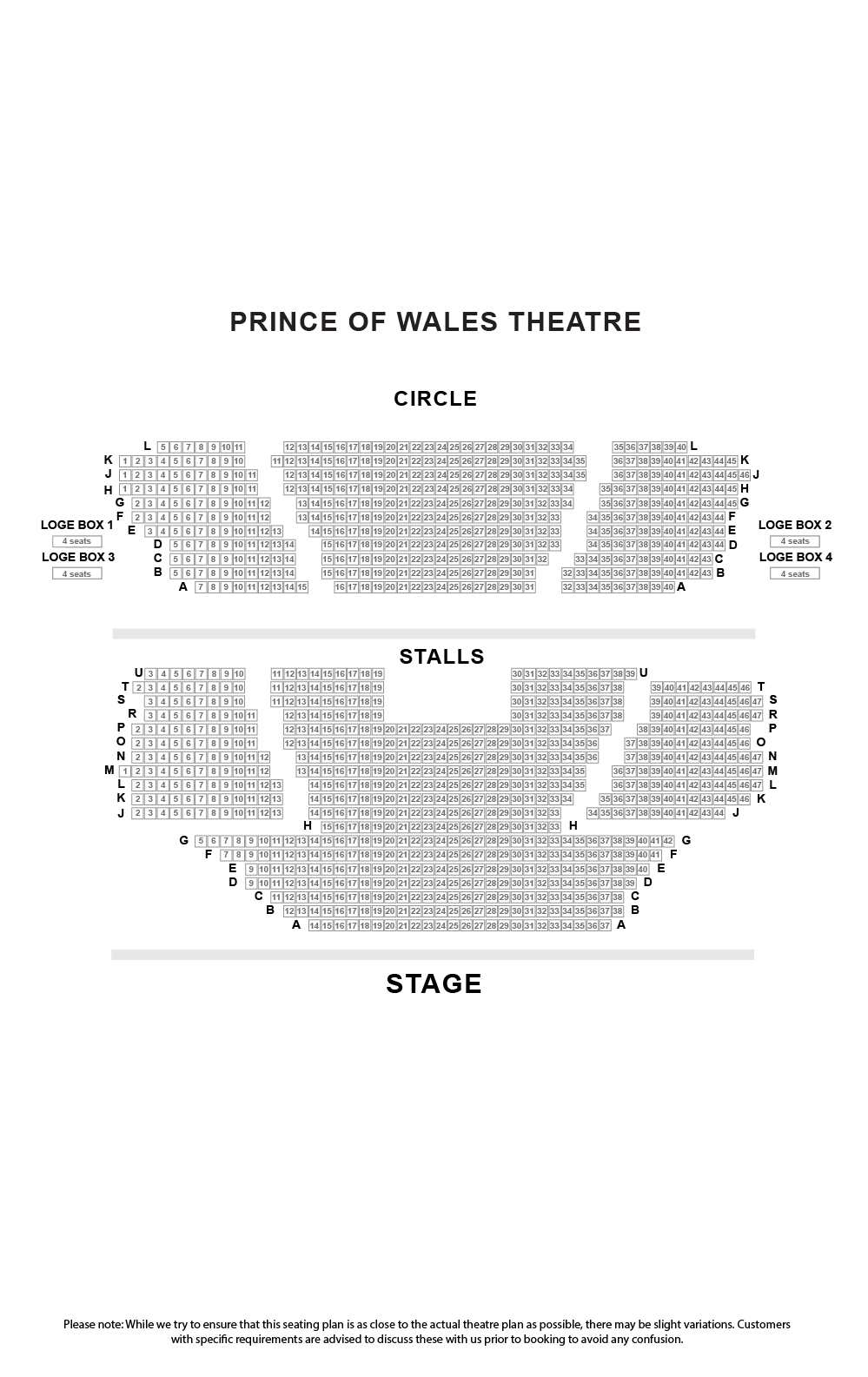