Tickets & Information For The Palace Theatre

The Palace Theatre is a west-end theatre located in the very heart of London's 'Theatreland'.  It is a large and imposing red brick building dominating the west side of Cambridge Circus close to the intersection of Shaftesbury Avenue and Charing Cross Road. The theatre has a seating capacity of 1,400  and was Grade II listed by English Heritage in 1960.

The theatre was commissioned in the late 1880's by Richard D'Oyly Carte in the late and was designed by Thomas Edward Collcutt.  Carte intended the venue to be used as the home of English grand opera, beginning with the Gilbert and Sullivan series and the foundation stone was laid by his wife Helen and can still be seen on the façade of the theatre.

The design of the theatre was considered to be novel as the upper levels are supported by heavy steel cantilevers built into the back walls, thus removing the need for supporting pillars that could impede the view of the stage. The tiers, staircases, corridors and landings are all constructed of concrete reducing the risk of damage that could be done by fire.

The theatre first opened as the "Royal English Opera House" in January 1891 with a performance of Arthur Sullivan's 'Ivanhoe'.   The production was a lavish affair with no expense spared to ensure its success, including a double cast and it ran for 160 performances, but when it finally closed, Carte had no new work to replace it, and the opera house was unfortunately forced to close due to lack of revenue.

The Palace Theatre re-opened in November 1891, staging Andre Messenger's 'La Basoche', and at first alternated repertory with 'Ivanhoe' and then 'La Basoche' alone, before closing again in January 1892.  As Carte had no other works ready, he leased the theatre to Sarah Bernhardt for a season before selling the opera house at a loss. The venue was then converted into a grand music hall by Walter Emden, and renamed the 'Palace Theatre of Varieties', to be managed by Charles Morton, known affectionately as the 'Father of Music Halls', who subsequently turned it into a successful enterprise.

After being denied permission by the London County Council to build a promenade, which was a popular feature of adult entertainment at the time, the Palace compensated by featuring apparently nude women in tableau vivants, although the concerned LCC had to reassure patrons that the girls featured in these displays actually wore flesh-toned body stockings.

In 1897, the theatre began screening films from the American Biograpgh Company as part of its programme.  These films pioneered the 70 mm format that gave it an exceptionally large and clear image to fill the proscenium arch. The films included newsreels from around the world.

Morton was succeeded as manager by Alfred Butt in 1904, who introduced many new innovations, including dancers, such as Maud Allen, famous for her 'Salome', as well as the elegant pianist-singer Margaret Cooper. In 1911, the name of the venue  was finally changed to 'The Palace Theatre'.

The musical director at the theatre from 1900 until 1920 was Herman Fink, who brought fame to both the orchestra at the venue by making many recordings and also to the beautiful Palace Girls, for whom Finck composed many dances.  The theatre's reputation was enhanced further as it hosted a Royal Command Performance in 1912 and big names began to perform there including he Marx Brothers who appeared there in 1922.

In March 1925, the musical comedy 'No No Nanette' opened at the theatre and a run of 665 performances made it the third longest-running musical in the west end in the 1920s. This was followed by 'Princess Charming' which ran for 362 performances in 1926 and the theatre was also the venue for Fred Astaire's final stage musical 'Gay Divorce' in 1933.

There have been many notable long running productions at the venue including 'The Sound Of Music' which ran for 2,385 performances at the Palace from May 1961, and ' Jesus Christ Superstar', with 3,358 performances from 1972 and 'Les Miserables' which ran at the theatre for 19 years before moving to the Queens Theatre (now Sondheim Theatre)  in April 2004.

Andrew Lloyd-Webber purchased the freehold of the theatre for £1.3 million in 1983 and immediately set out on a series of restoration work. During the work on the auditorium, a layer of plum-coloured paint was removed which revealed the famous marble and onyx panels that were completely untouched. After the departure of 'Les Miserables' in 2004, the facade and front of the house at the theatre were restored and refurbished, the marble walls uncovered, and brand new chandeliers were installed.

More recent shows appearing at the venue include 'The Woman In White' which received its world première in 2004 and Bill Kenwright's production of 'Whistle Down The Wind'  in 2006, which was a disappointment and lasted just five months. but was followed by 'Monty Python's Spamalot'  in September 2006 and ran until January 2009 before it was replaced was replaced by 'Priscilla Queen Of The Desert' in March 2009.  The current show performing at the Palace Theatre is 'Harry Potter And The Cursed Child'.

Tickets to all productions at the Palace Theatre can be booked securely through this website.

FAQ's About Booking Tickets To The Palace Theatre

How Can I Book Cheap Tickets To The Palace Theatre?

The Palace Theatre do offer a small selection of very affordable 'Day Tickets' for those who don't mind queueing up and trying their luck.  If booking online and looking for cheap tickets then the upper circle and balcony also offer affordable options.

Should I Avoid Upper Circle And Balcony Tickets To The Palace Theatre?

The Palace Theatre has four tiers with the cheaper seats located on the second and third floor.  There are not too many seats with bad restrictions to the view but balcony and upper circle tickets are situated quite high up and this should be taken into account before purchase  It is always advisable to check the seating plan carefully before booking tickets in these sections to ensure that you have both a clear view of the stage and are aware of exactly where in the auditorium you will be seated.

Where Are The Best Tickets To The Palace Theatre Located?

This will depend on whether you prefer to be seated on the ground floor level in the stalls looking directly at the stage, or in the dress circle on the first floor looking down from an elevated position?  The best stalls tickets are situated on the centre aisle with the numbers 15&16 being on either side and in the dress circle the centre aisle seats are numbers 18&19.  In both sections these seats will give customers a completely clear view of the stage along with direct access to the aisle.

(5mins) Take Charing Cross Road until you reach the crossroads with Shaftesbury Avenue. 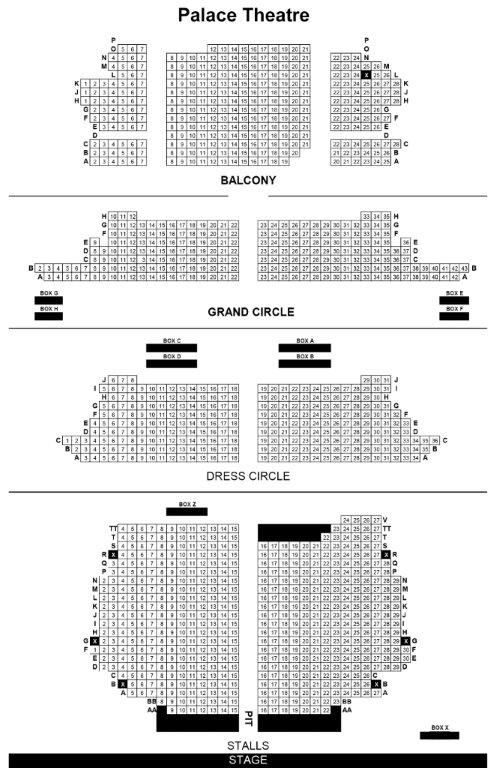