With performances due to begin at the Sondheim Theatre from May 20th, the full cast has now been named for Les Miserables: The Staged Concert. Performances of the concert will run at the venue until 5th September, with tickets on sale now.

Taking the role of Enjolras will be Jamie Muscato who previously played Jean Prouvaire. Charlie Burn will play Cosette in the show, and Dean Chisnall will star as Jean Valjean for select performances.

The trio will be joined in the principal cast by Jon Robyns as Jean Valjean, Lucie Jones as Fantine, Bradley Jaden as Javert, Shan Ako as Éponine, Gerard Carey as Thénardier, Harry Apps as Marius,and Josefina Gabrielle who will play Madame Thénardier.

Producer Cameron Mackintosh said of the concert: “The spectacular Staged Concert was presciently put together, unknowingly socially distanced, over two years ago at the Gielgud Theatre. Every performance has been a sell out and this time, our wonderful Company drawn from the current stars of both the new acclaimed West End and National touring companies of Les Mis... Let the People Sing with joy again!”

The full production of Les Miserables will return as soon as Les Miserables: The Staged Concert has ended on September 5th and is expected to resume performances from  25th September.

Tickets to Les Miserables: The Staged Concert are on sale now securely through this website. 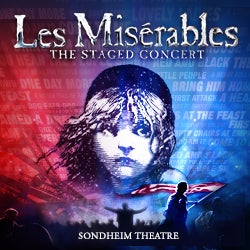