Tickets & Information For The Gielgud Theatre

The Gielgud Theatre is a west-end venue situated on Shaftesbury Avenue at the corner of Rupert Street that currently has a capacity of 889 seats on three levels.

The theatre first opened its doors to the general public in December 1906 as the 'Hicks Theatre' in honour of playwright, actor, and manager Seymour Hicks, for whom it was built and was designed by W.G.R Sprague.  The theatre originally had 970 seats, but boxes and other seats have been removed over time. The theatre is part of a pair with the Queens Theatre (now Sondheim Theatre) which is situated on the adjacent street corner.

The first-ever staged production at the Gielgud was 'The Beauty Of Bath', a musical by Seymour Hicks and Cosmo Hamilton, which was followed in 1907 by another Hicks musical, 'My Darling', which was subsequently followed in 1908 by the London production of the Straus operetta, 'A Waltz Dream'.

The following year, the American impresario Charles Frohman became sole manager of the theatre and renamed it the 'Globe Theatre', reopening the venue with a production called 'His Borrowed Plumes' written by Lady Randolph Churchill.

Other notable and more recent productions at the venue include Terence Frisby's 'There's A Girl In My Soup', which opened in 1966, ran for an astonishing 1,064 performances, a record that was not surpassed at the theatre until Andrew Lloyd-Webber's production of the comedy 'Daisy Pulls It Off' opened in April 1983 to run for 1,180 performances, which is still the theatre's longest run to date.

The theatre was also the home of a resident cat named Beerbohm, and the tabby's portrait still hangs proudly in the corridor near the stalls. Actors were regularly forced to improvise as Beerbohm appeared on stage at least once in every production, and he had a habit of occupying certain actors' dressing rooms while they were performing at the theatre, Beerbohm was well known and received further recognition by being mentioned several times on Desert Island Discs. he is believed to be the only cat ever to have received a front-page obituary in the 'The Stage' after sadly passing away in March 1995 at the age of 20.

The theatre went through a refurbishment program in 1987, with extensive work being done on the gold leaf in the auditorium.  The interior of the theatre is particularly notable for its circular Regency staircase, oval gallery, and tower.

Several Alan Aykbourn premieres have been performed at the Gielgud, including 'Man Of The Moment'.   Other notable productions to showcase at the venue more recently include Oscar Wilde's classic comedy, 'An Ideal Husband' and 'One Flew Over The Cuckoo's Nest'.

The theatre changed its name to the Gielgud Theatre n 1994, in honour of Sir John Gielgud and in anticipation of the 1997 opening of the reconstruction of Shakespeare's Globe Theatre that was due to open on the South Bank.  Sir Cameron Mackintosh drew up plans for a refurbishment of the Gielgud in 2003, which included a joint entrance foyer, with the adjacent Queen's Theatre. Delfont Mackintosh Theatres eventually took over operational control of the venue from Andrew Lloyd-Webbers Really Useful Group in 2006.

Refurbishment work on the facade of the Gielgud Theatre eventually began in March 2007 with the interior restoration being completed in January 2008.

Theatre tickets to all performances at the Gielgud Theatre can be purchased securely through this website.

FAQ's About Booking Tickets To The Gielgud Theatre

How Can I Book Cheap Tickets To The Gielgud Theatre?

The price of tickets is always fuelled by demand and it can be difficult to source well priced tickets to the more popular productions.  For bargain hunters looking for cheap ticket options however, midweek matinees can bring savings as there is a strong chance that understudy's could be used which should reflect in the ticket price so if it is the production rather than the cast that interests you this should be looked at.

Are Upper Circle Tickets To The Gielgud Theatre Good Value?

There have been new seats installed into the upper circle of the Gielgud Theatre which offer better legroom than before and despite being quite high up there are not too many seats in this section that feature bad restrictions to the view.  For patrons searching for good value when booking tickets in the upper circle, row F offers a completely clear view and also has the benefit of a corridor walk way directly in front for added legroom.  Otherwise, the seats in the centre and at the front of the upper circle also have a good vantage point and should not be dismissed

Should I Avoid Tickets To The Gielgud Theatre That Have A Restricted View?

There are three different levels in the theatre - stalls on the ground floor, dress circle one level up and then the upper circle on the second floor.  Not too many seats in the Gielgud Theatre do feature restrictions although there are some issues from the overhang in the stalls from row R onwards which affects the top of the stage.  The severity of the restriction should always be reflected in the price so please check the seating plan thoroughly before booking any tickets for that are marked as having a restricted view.   The dress circle section is only very slightly raked which can cause issues for shorter patrons and should be noted.

(3mins) Take Shaftesbury Avenue along the side where the famous illuminated signs are. The theatre will be on your left about 100 metres along. 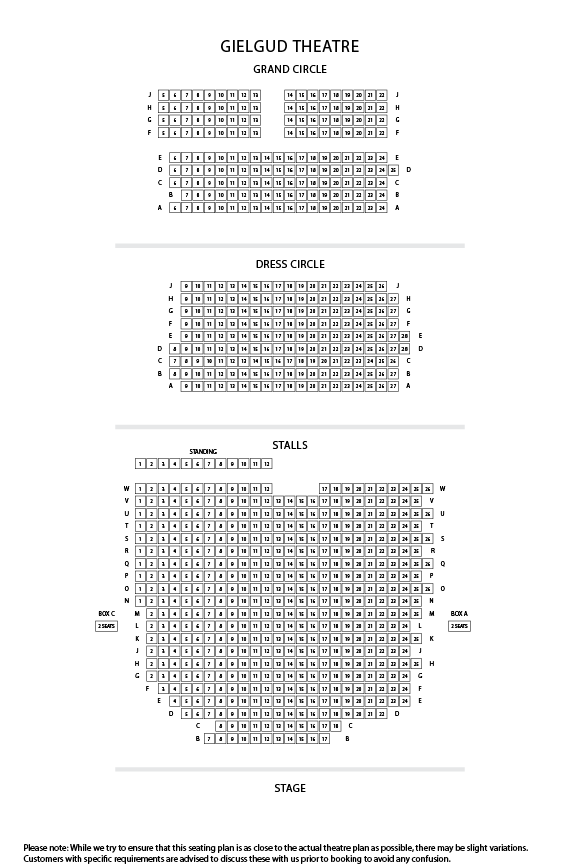