Full Casting Announced For Joseph and the Amazing Technicolor Dreamcoat

The complete cast has finally been announced by producer Michael Harrison for the new production of Tim Rice and Andrew Lloyd Webber's Joseph and the Amazing Technicolor Dreamcoat, which is to begin performances at the London Palladium on July 1st for a limited summer run. Ticket sales for the show's return to West End are available to book online now.

They now join the principal cast, previously announced of Jason Donavan who will play Pharoah, Jac Yarrow as Joseph, and Alexandra Burke who takes on the role of the Narrator, that also has Linzi Hateley filling in the role for select performances. Donovan and Hateley starred together in the original production of the show, and Yarrow actually made his professional debut in the role at the London Palladium in 2019.

'Joseph' was the first major collaboration between Rice and Lloyd Webber, Joseph and features a lively score full of singalong favourite songs including "Any Dream Will Do," "Go Go Go Joseph." and "Close Every Door to Me," This latest production will be directed by Laurence Connor, with choreography from JoAnn M Hunter. 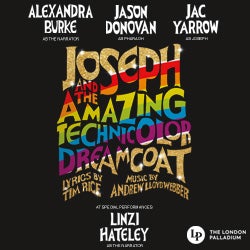