Tickets & Information For The Dominion Theatre

The Dominion Theatre is a west-end theatre centrally located at the bottom of Tottenham Court Road and was built on the site of the former Horse Show Brewery in 1928–29.  Designed by W and TR Milburn and featuring a steel-framed construction and a concave Portland stone facade, it was purpose-built as a theatre for live shows, however, after some faltering business in the early 1930s, the theatre was converted to also enable it to show movies.

With its huge 2,858 capacity, the Dominion Theatre did well commercially thanks to its excellent location however, the cinema was forced to close temporarily at the height of the Blitz early in October 1940, but re-opened again on 12th January 1941.  The theatre forged a link with the New Victoria Theatre which continued after the war ended almost invariably showcasing the Gaumont circuit programme for a pre-release week just before it went onto the Northwest London area to begin its suburban run.

Rank looked to make regular use of the Dominion Theatre for live shows again in 1956 and the first major use as a live venue arrived when the 'Judy Garland Show' ran from16th October to 16th November 1957 although movies were still shown for the rest of the time.

The venue was selected to showcase movies using the new Todd AO system which saw two Phillips 70mm / 35mm projectors installed into a new projection box at the back of the stalls that provided a 78-foot level throw to an immense 46-foot-wide screen, with a 5-foot-deep curvature erected in the huge 54-foot-wide proscenium opening.  The seating capacity was reduced to 1,654  and stereophonic sound was provided with the upper gallery being curtained off.

In April 1958, South Pacific inaugurated the new road show policy and racked up the longest ever run of four years, 22 weeks, before finally closing down in September 1962.  After waiting patiently for more than three years, Samuel Goldwyn opened 'Porgy And Bess' at the venue, but the previous success of South Pacific, unfortunately, did not rub off on it. Another mammoth attraction was 'Cleopatra', which opened at the Dominion in 1963, but it was eventually the run of 'The Sound Of Music' from March 1965 to June 1968 that rubber-stamped the Dominion Theatre's credentials as a home of musicals.  Following redecoration in July 1968, 'Star' proved more successful at the Dominion Theatre than anywhere else, however, as Hollywood stopped making the big-budget extravaganzas, the Dominion was once again in trouble and was earmarked purely for live use only from November 1981.

The venue also became popular during the 1980s for concerts.  Tangerine Dream's album Logos was recorded there in 1982, and even contains a song called "Dominion" written in tribute to the theatre.  Dolly Parton performed there in 1983 which was filmed and released as a TV special and in the mid-1980s the theatre hosted the musical 'Time', which saw the interior of the venue being extensively reconstructed to accommodate the show's elaborate special effects.

The Dominion played host to a variety of west-end stage shows from the early 1990s, including 'Grease', 'Scrooge', 'Beauty And The Beast', and 'Notre Dame De Paris' that have all enjoyed successful runs at the theatre and the venue now boasts a capacity of 2,182 in two tiers of galleries and retains its 1920s light fittings and art deco plasterwork

A new resident show arrived at the Dominion in 2002, in the form of Brian May, Ben Elton and Roger Taylor's megahit hit stage musical 'We Will Rock You', based around the songs of supergroup Queen and is the longest running musical ever to play at the Dominion Theatre.

The current show at the Dominion Theatre is The Prince Of Egypt and tickets to all performances can be securely purchased through this website.

FAQ's About Booking Tickets To The Dominion Theatre

Are Tickets To The Dominion Theatre Expensive?

The Dominion Theatre is a very large venue to fill for 8 shows every single week which should mean that if you are flexible with dates and can go midweek then good value tickets should definitely be able to be found if you look and have a little patience.  If possible, try to avoid weekend performances and school holidays if you are looking to keep the price down.

Are There Any Seats That Should Be Avoided When Booking Tickets To The Dominion Theatre?

The Dominion Theatre does not have many seats that feature restrictions to the view and there is no problem from either pillars or the overhang from the circle which is a blessing.  The best tickets are generally located towards the centre of the auditorium in the stalls or front centre of the circle with prices getting cheaper the further to the back or sides you get. It is always advisable to check the seating plan before you book to ensure that you get a clear view from your seat.  All tickets with restrictions to the view should be clearly marked as either 'Restricted View' or 'R/V' both online and also on the ticket itself to give you peace of mind about your purchase before seeing the show.

Are All Of The Tickets At The Dominion Theatre Good Value?

As there are not many seats with restrictions in the Dominion Theatre but there are quite a few different price bands it is strongly advisable to study the seating plan in detail before buying tickets.  Each price band has to have a cut off point by default and very often you can get two seats next to each other or one in front of the other that will have pretty much the exact same view of the stage that feature a large difference in price!  If you can book for midweek performances and look for value within the different price ranges of the tickets you will find it and could save money on your purchase.

Is It Possible To Find Tickets To The Dominion Theatre Discounted?

The West End is very much a supply and demand business and even the most popular shows in London will always have quiet weeks.  If you are looking for the best value and the most bang for your buck when booking tickets it is recommended to look at the naturally quiet weeks of the year such as late January or straight after the February half term holiday which is a great time to see any West End show on a budget.  It is unlikely that discounts will be found at the box office itself however the official online ticket agencies and the shops in and around Leicester Square will usually have bargains and discounts in place during these weeks.

The theatre can be seen from the station, on the corner of the crossroads between Tottenham Court Road and Oxford Street. 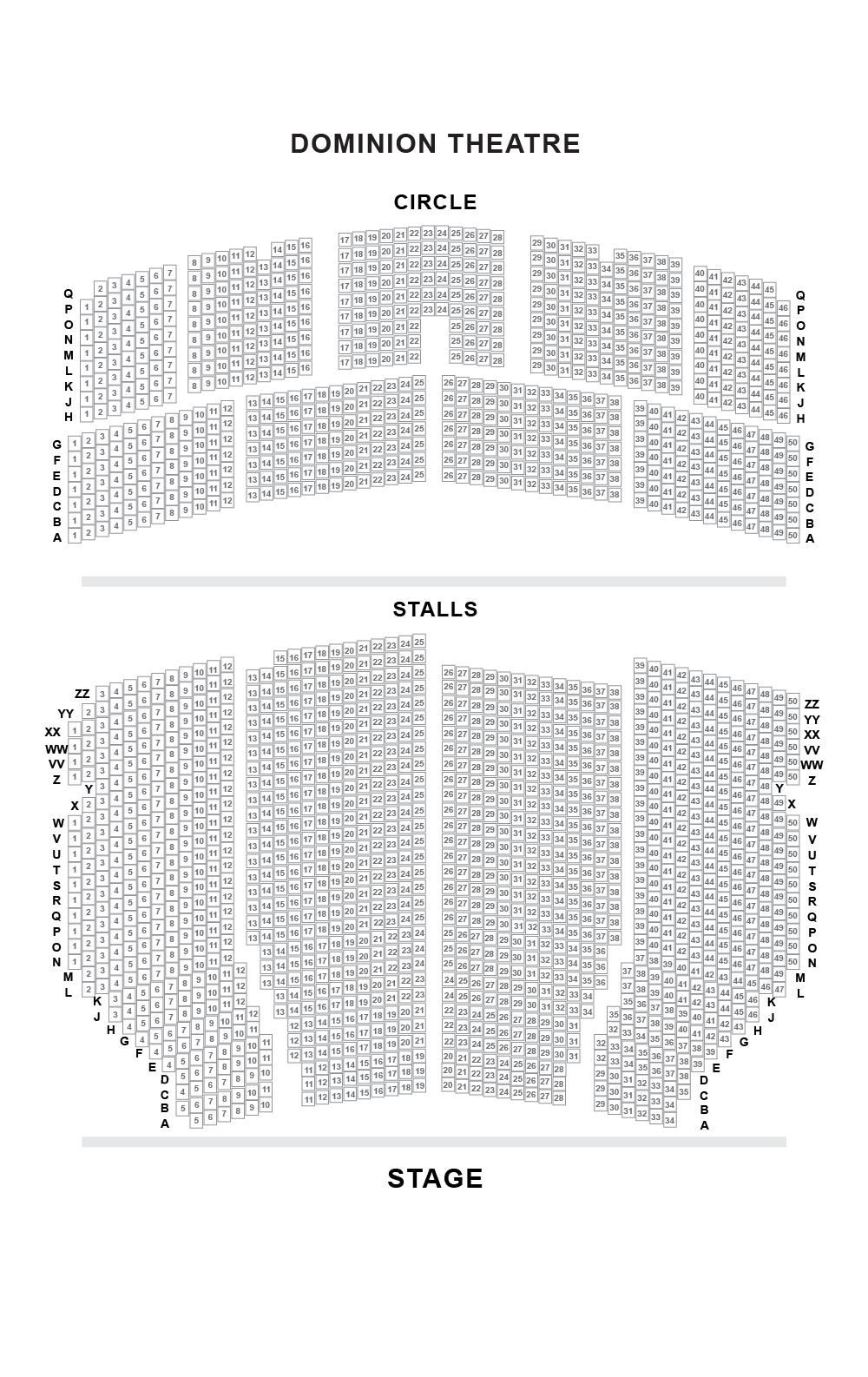