Tickets & Information For The Criterion Theatre

Located with pride of place in the middle of Piccadilly Circus, the Criterion Theatre is a Grade II listed building with an official capacity of 588.

Caterers Spiers and Pond began the development of the site of the 17th-century posting inn, the White Bear in 1870.  The building was located on a stretch of sloping ground between Jermyn Street and Piccadilly Circus and a competition was held to create the design of a concert hall complex,.  The competition was won by Thomas Verity who was subsequently commissioned to design a large ballroom, restaurant, dining rooms, and a galleried concert hall in the basement of the complex. The front of the building, which was also the façade of the restaurant showed a significent French Renaissance influence by using Portland stone.

It was decided while the building work was in progress to change the concert hall into a theatre and the redesign placed the Criterion Restaurant and dining rooms above the theatre, and a ballroom area was built on the top floor. The tiled staircases are lined with the names of composers and can still be seen to this day.

Problems came when Spiers and Pond applied for a licence to operate as the authorities were concerned due to the theatre section being located underground and lit by gas seeing the Metropolitan Board of Works voting twice before the necessary licence was finally issued.   The auditorium had fresh air pumped into it to prevent the audience from being asphyxiated and the building was finally completed in 1873 with the interior decorations by Simpson and Son.

The Criterion Theatre first opened to the public on 21st March 1874 under the stewardship of Henry J Byron & EP Hingston and showcased a programme consisting of 'An American Lady' which was written and performed by Byron followed by a piece by W S Gilbert entitled 'Topsyturveydom'.

In 1875, Charles Wyndham became the manager and lessee and during his tenure, The Criterion Theatre became one of London's leading light comedy houses. Following Wyndham's departure in 1899, he remained the lessee and brought in various managements and their companies to the theatre.

The theatre had to close for alterations in 1883 which were demanded by the Metropolitan Board of Works as the pumping of fresh air into the ten-year-old auditorium below street level, was deemed to be unsatisfactory. The alterations meant that the new direct access ventilation shaft cut off a considerable portion of the adjoining Criterion Restaurant and new corridors had to be built, along with several new exits. Inside the theatre, the auditorium was reconstructed,the stage completely re-equipped and the old dressing rooms demolished with new ones built. Possibly the most important addition was the installation of electricity.  More alterations and redecorations were carried out in 1902-03, which saw the theatre closed for seven months.

Notable productions staged between the world wars included 'Musical Chairs' starring John Gielgud and 'French Without Tears' in 1936, which ran for 1,039 performances and launched the writing career of Terence Rattigan.

The theatre was requisitioned by the BBC during World War II - as with its underground location it made an ideal studio safe from the bombing during the London blitz - and morale boosting light entertainment programmes were both recorded and broadcast live from there.

the theatre site was proposed for redevelopment in the 1970's, which caused huge protest as people feared the theatre could be lost forever. The GLC Planning Committee approved the development of the site on the condition that the theatre was able to continue in full continuous and uninterrupted use while the work was carried out.

Property tycoon Robert Bourne bought the building in the 1980s. As a patron of the arts, Bourne and his wife, theatre impresario Sally Greene then set up the 'Criterion Theatre Trust', a registered charity designed to protect the Criterion's future. The theatre was closed from April 1989 to October 1992 whilst it underwent major renovations both in the front and back of the house and during that time, the block that exists on the site today was built around it however the Criterion was able to retain its well-preserved Victorian auditorium and intimate atmosphere.

Tickets to all productions staged at the Criterion Theatre are available to book securely through this website.

FAQ's About Booking Tickets To The Criterion Theatre

Where Is The Best Place In The Theatre To Book The Cheapest Tickets At The Criterion?

There are three tiers in the Criterion Theatre - the stalls on the ground floor, the dress circle one floor up and then the upper circle on the second floor.  The theatre has many seats that feature quite severe restrictions due to support pillars that are located on the first two levels.  The seats in the upper circle however while not offering a lot of legroom for taller patrons, do mostly have a relatively decent view of the stage with no interference from either pillars or an overhang as there is no balcony section.  Booking tickets at the Criterion Theatre in this section does offer some value, especially for weekend performances when tickets in the other sections will be sold at a premium and expensive.

Should I Avoid Booking Tickets At The Criterion Theatre That Have A Restricted View?

The clear view seats in the front and centre of both the stalls and dress circle both offer good views of the stage (despite the seating in the stalls not being raked steeply) however, there are issues towards the back of the stalls from the overhang from the dress circle that can affect the view from row M onwards. There are also pillars obstruct the view to the back of the stalls that are a problem.  In the dress circle there are some specifically designated ‘restricted view’ seats because of the pillars that support the upper circle in Row C. All seats that do feature restrictions however should be priced accordingly, and it will depend on the actual production as to how severe the restrictions are so it is highly recommended that patrons study the seating plan thoroughly before booking tickets at the Criterion that are marked as 'restricted view', and always remember that 'cheap' is not always a 'bargain!'

The theatre can be seen on Piccadilly Circus next to the Eros statue. 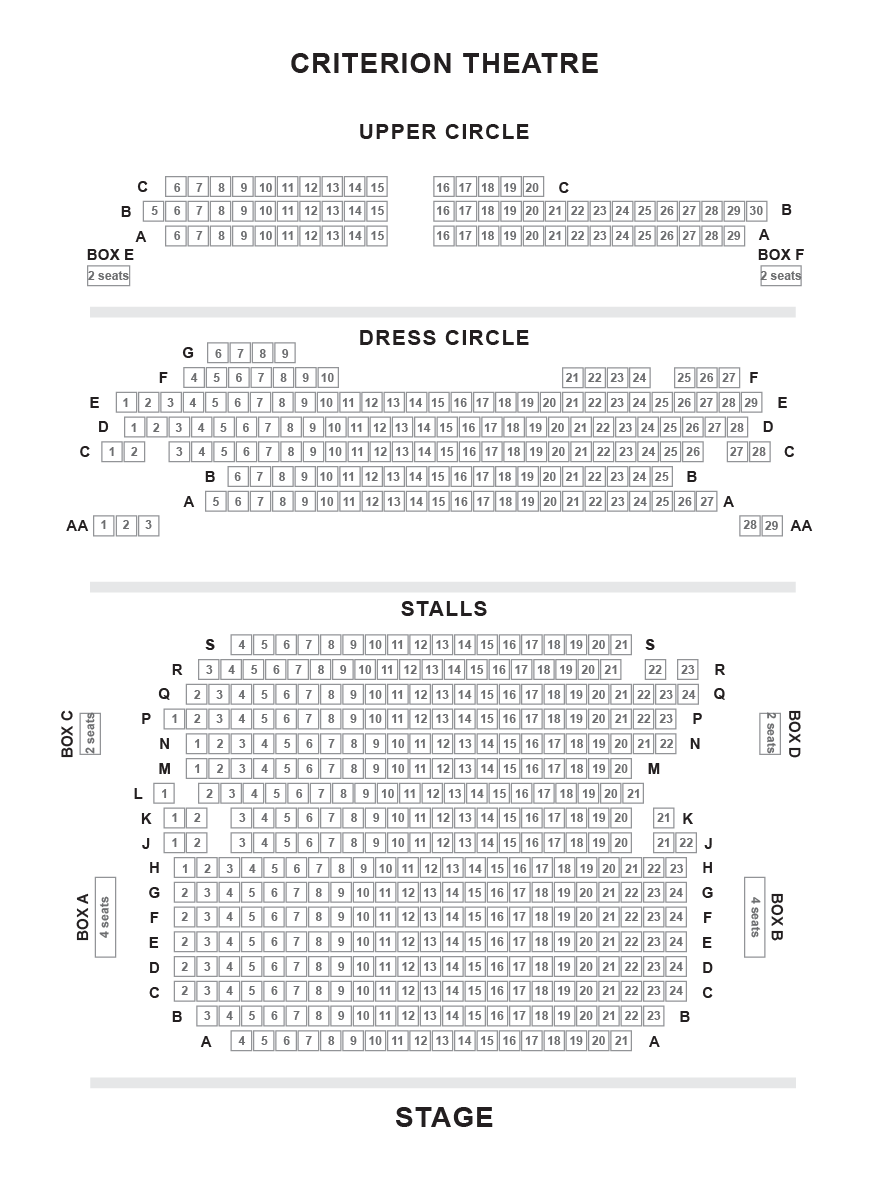 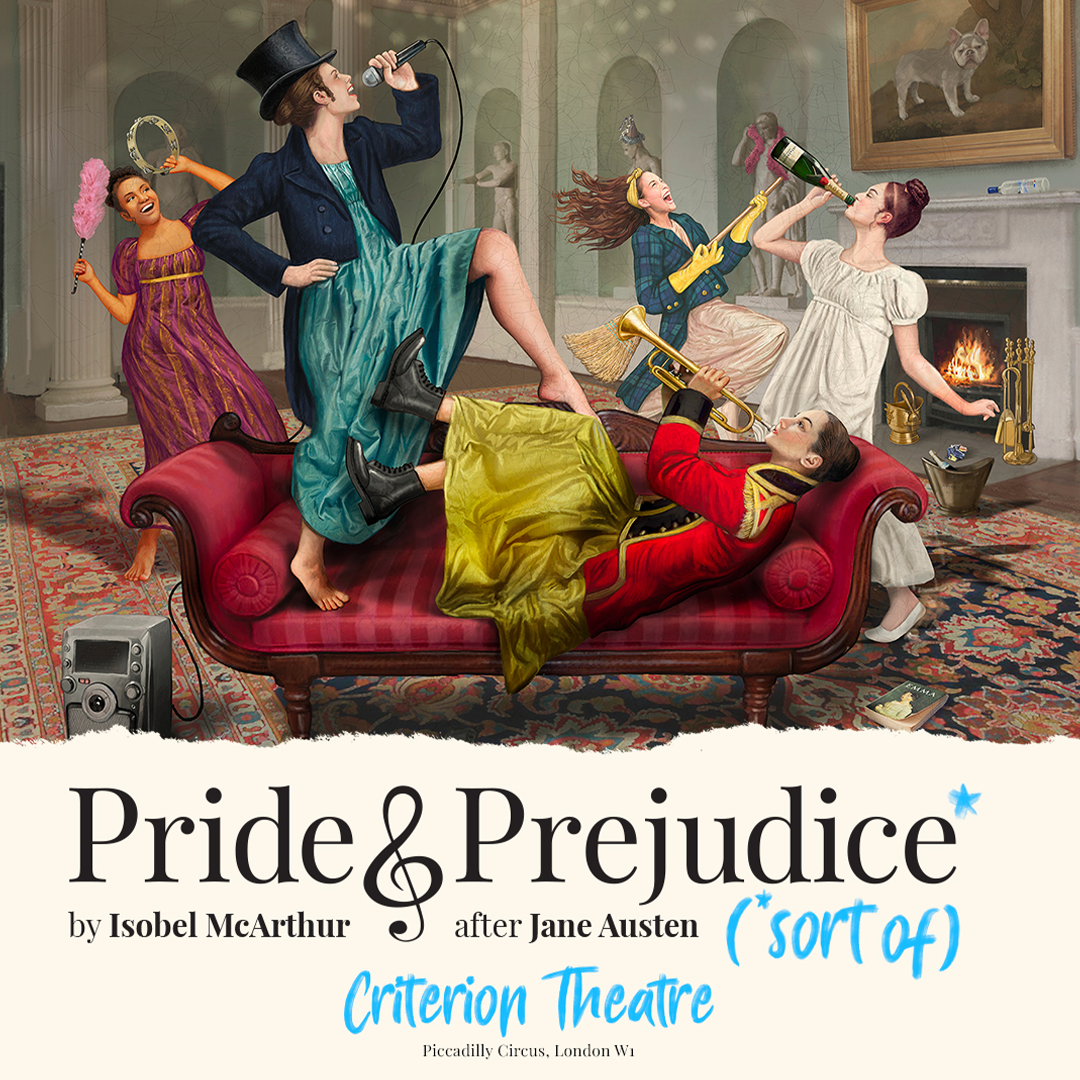