Casting For Summer Season Of Heathers The Musical Announced

Casting for the summer season revival of Heathers has now been announced so get ready for some “Big Fun” as the show is to open at Theatre Royal Haymarket from June 21st - September 11th, with tickets on sale now.

Jordan Luke Gage will take on the role of JD, and Christina Bennington will star as Veronica Sawyer.  The duo will be joined by Jodie Steele who reprises the role of Heather Chandler, and Bobbie Little and Frances Mayli McCann who will play Heather Duke and Heather McNamara respectively.

Other notable members of the show's cast include Simon Hailey, Steven Serlin, Lauren Ward, Madison Swan, and Joaquin Pedro Valdes with further casting to be announced.

Heathers The Musical is based on the 1980s movie of the same name, and centres on Veronica Sawyer, who after joining the “Heathers” group begins to discover her own identity. The show features music, book, and lyrics by Kevin Murphy and Laurence O’Keefe, and is directed by Andy Fickman with choreography by Gary Lloyd.

This latest West End revival of Heathers is due to open on June 21st which will hopefully mark the first day of the government's Step Four', when theatres can finally reopen with no social distancing and will run until September 11th 2021. 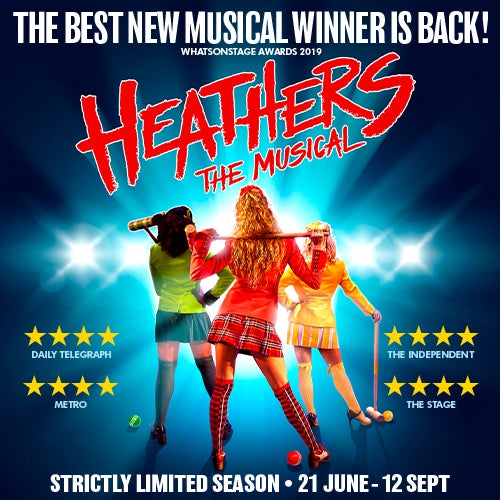