Austentagious To Return To London At The Leicester Square Theatre

The hilarious show Austentatious is set to return to London for another madcap season of improvisational entertainment at the Leicester Square Theatre with selected dates scheduled in between February 15th and June 27th 2022.

Austenatious is an improvisational show featuring a company of actors performing in full Regency costume who create a brand new show inspired by novels by Jane Austen.

Speaking of the forthcoming season in the capital, a spokesperson from the company said "We are overjoyed to be spending the season with our dear friends at Leicester Square Theatre, for there is nowhere quite like London in the springtime! We do hope you will join us in the heart of town for new adventures, new romances and gossip aplenty as we ride our carriage right through the season!’

Austentatious previously ran at both the Fortune Theatre, and the Udderbelly Festival in London, as well as the Edinburgh Festival Fringe.

Performances of Austentatious will be at the Leicester Square Theatre. 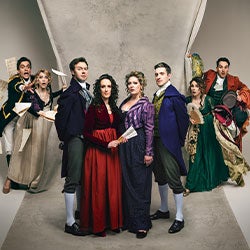