Tickets & Information For The Adelphi Theatre

Standing proudly in the centre of the Stand, the Adelphi Theatre is a 1500-seater west-end theatre, specialising in big-budget musicals and comedies. The present building is the fourth venue on the site and was Grade II listed for historical preservation on 1st December 1987.

The Adelphi Theatre was founded in 1806 as the 'Sans Pareil' (which means "Without Compare"), by merchant John Scott, and his daughter Jane who was a theatre manager, performer, and playwright.

Together they put together a theatrical company and the theatre received its license for musical entertainments, pantomime, and burletta in 1809 with Jane herself writing more than fifty different stage pieces including pantomimes, farces, comic operettas, and historical dramas before she eventually retired to Surrey in 1819.

The theatre eventually took its current name 'The Adelphi' on 18th October 1819, which was adopted from the buildings opposite and was known in its early years for staging melodramas which were known as the 'Adelphi Screamers'.  Many of Charles Dickens early works adapted for the stage and shown at the Adelphi, including 'Nicholas Nickleby' and 'The Old Curiosity Shop' among others and the theatre itself makes a cameo appearance in 'The Pickwick Papers!'

New management of the theatre arrived in 1844 with Madame Celeste and comedian Benjimin Webster however the staging  of dramatisations of Dickens continued until the old theatre was eventually demolished. On 26th December 1858 The New Adelphi Theatre was finally opened to huge public acclaim and could comfortably seat 1,500 people, with standing room for another 500.

The Adelphi went under renovation again in 1879 and then yet again in 1887 when The Hampshire Hog pub, the house next door, and the Nell Gwynne Tavern were all purchased in order to make the theatre bigger. A brand new and bigger facade was also built and part of this is still visible today above the Crystal Rooms next door to the present theatre.

The theatre has also had its share of notoriety after a 19th century actor, William Terriss, who performed regularly at the Adelphi was stabbed to death during the run of ‘Secret Service’ on 16th December 1897 as he entered the building through the royal entrance in Maiden Lane. There is a plaque marking this event  event on the wall by the stage door which says that the killer was one of the stagehands at the theatre  It has also been said that Terriss' ghost still haunts the theatre.

The third version of the theatre opened on 11th September 1901 as the 'Century Theatre' however the name reverted back to 'Adelphi' in 1904. George Edwardes, the dean of London musical theatre took over the management of the theatre in 1908, and the theatre as we know it today finally opened its doors on 3rd December 1930 as the Royal Adelphi Theatre which had been redesigned in Art Deco style by Ernest Schaufelberg. The first production to be staged in the redesigned venue was the hit musical 'Ever Green'. In 1940 the theatre again reverted back to the name 'The Adelphi'.

Andrew Lloyd-Webber's 'Really Useful Group' bought the theatre in 1993 and the venue went through another extensive refurbishment prior to the opening of his adaptation of 'Sunset Boulevard'.

Tickets to all performances of the current production at the Adelphi Theatre - Back To The Future - The Musical are available to book securely online through this website.

FAQ's About Booking Tickets At The Adelphi Theatre

Where Is The Best Section Of The Adelphi Theatre To Book Tickets?

The theatre has three levels - the stalls on the ground floor, the dress circle one level up and then the upper circle on the second floor.  The seats with the best view of the stage are located towards the centre of the stalls for those who prefer to look straight at the stage head on, or in the dress circle for those who have a preference to look down from an elevated position.  There is only a slight raking of the seats in all sections of the theatre which can occasionally pose problems for shorter patrons however luckily there are not many seats that feature actual restrictions to the view with the exception of some seats on the sides of row N and beyond of the dress circle where there are minor issues due to the overhang from the upper circle so please be aware of this before booking tickets in this section.

How Can I Book Discount Tickets At The Adelphi Theatre?

The Adelphi Theatre is a very large venue to fill for eight shows every week and it is likely that for midweek performances at least after a period of time there will occasionally be a selection of discount tickets available either online or from the official shops located in and around Leicester Square.  If booking for weekends though this may not be the case so flexibility with dates is very much a key factor when searching for bargains.

Should I Avoid Booking Upper Circle Tickets At The Adelphi Theatre?

Seats in the Upper Circle in the Adelphi Theatre are set fairly high up, however they are not as far away from the stage as in other venues and there is definitely some value to be had for tickets in this section in the centre seats for weekend performances when ticket prices in the two lower sections will be priced at a premium.

Where Is The Best Place To Book Cheap Tickets At The Adelphi Theatre?

As the Adelphi Theatre is a large venue we anticipate that after a while there may be be some discounts available to off peak and midweek performances.  Also, as there are several different price bands in the theatre, it can sometimes pay dividends to look to book tickets through third party ticket agents either online or through the official shops around Leicester Square.  For peak time performances however it may be cheaper to book directly from the box office to avoid booking fees that could possibly be included from agents who will need to add the extra cost on to the consumer if they are not receiving discounts themselves from the theatre.  When booking any theatre tickets in London through third party agencies it is always wise to ensure that they are either affiliated with or members of the Society of Ticket Agents and Retailers (STAR) to ensure full transparency over your purchase.

(3mins) Head out onto the main road Strand. Cross the street where possible and go right (approx. 150 metres). The theatre is on your left. 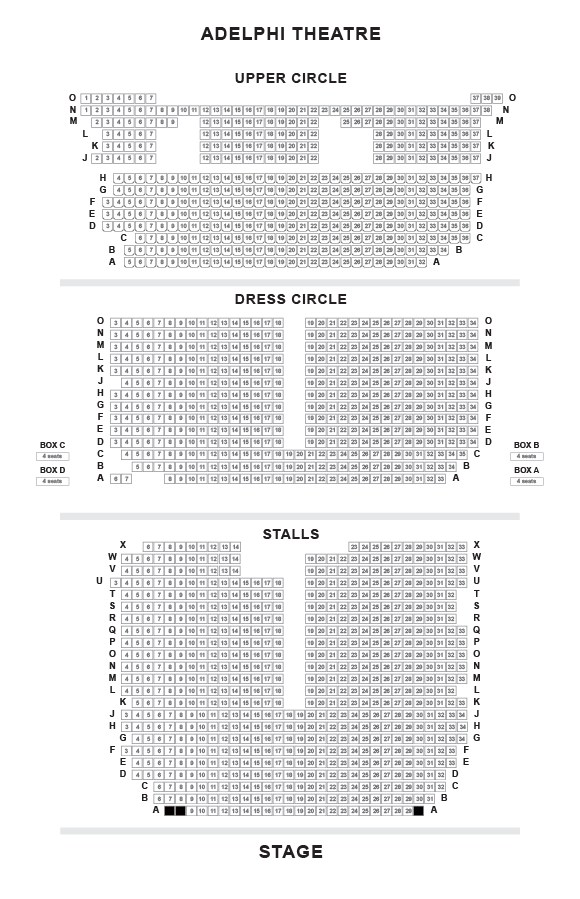